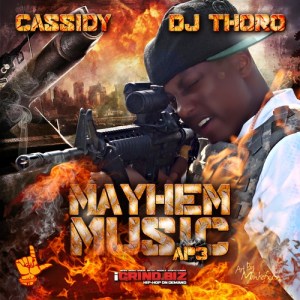 Nearly a decade has passed since Cassidy burst onto the scene, immediately gaining superstardom. From 2003 through 2005, Cassidy stood as one of the most-popular rappers in the game. But, a near-fatal car accident forced Cassidy to be sidelined throughout 2006 and much of 2007 before he returned, regaining his position.

Since 2008, however, Cassidy has focused more of his energy on the mixtape game, which has gained tremendous popularity. Through his Apply Pressure series, Cassidy has become one of the most-anticipated artists on the mixtape scene. Following weeks of promotion, the third edition dropped earlier today.

Cassidy teamed up with DJ Thoro for the release of Apply Pressure 3, which is properly titled Mayhem Music: AP3. On the project, Cassidy features the likes of current hip hop frontman, 50 Cent, and rising New Yorker, Fred the Godson. Cassidy also keeps up with the current trend, with his version of Chief Keef’s “I Don’t Like” featured also.