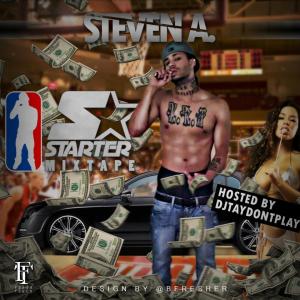 At a young age, Steven A. knew he was different from everyone else. Artistic, Steven A felt his career path would go down a different direction than most. Wanting more out of life, Steven A. was enticed by the hip hop lifestyle.

Steven A. began his rap career and has been working hard. Recently, Steven A. teamed up with DJ Tay Don’t Play for his new release, Starter Mixtape. In many ways, the mixtape is like an album for Steven A.

The project serves as an introduction to the world, as they have a chance to formally meet Steven A. Steven A. has been featured on numerous songs and singles, but Starter Mixtape features him as the lead artist. Hip Hop Vibe recently spoke to Steven A. about his new project and his working relationship with DJ Tay Don’t Play.

When was it when you realized you wanted to be a hip hop artist? The day I realized I wanted to be a artist was right after SUMMER JAM 08, I saw all these artist and I knew right then and there it’s what I wanted to do with my life.

What do you think it was that led you in this direction? I think for me, personally, it was the way I grew up, what I have been through in my life that made me want to do something different with my life. I was never like other kids growing up; I was the one who knew I wanted something more.

How did the concept for Starter Mixtape come about? After Ready 4 Fame with DJ Tay Don’t Play, I knew I wanted to do a three tape series and I knew I had to push myself to be creative and late 2011. I started saying I’ve been in the game, I’m a starter an that’s what got the project going and that’s what the whole projects about.

Can you talk about how you feel about the project? The way I feel, I feel like I’m just getting started and I’m not about to quit anytime soon. This project meant a lot for me and I put in work. Me and DJ Tay, have been vibing and this tape gave my music the green light to keep GRINDING!

How did DJ Tay Don’t Play end up involved with the project? Tay has been rolling with me ever since Ready 4 Fame. I and he have a father/son type relationship and he does a lot for me and I appreciate everything he does for me. He was the rite DJ for the project.

A native of Rhode Island, how did you link up with SODMG? I linked up with SODMG about a year ago and I was going thru hard times always in trouble. I felt lost and then one day, on Facebook, one of Soulja Boy’s artists messaged me saying she felt my music. Ever since I have been shooting for that deal and all it takes is time, patience and WORK!

With your buzz increasing, how you feel about the way things have played out? I feel things are going smooth for me and, like I said, before I’m just getting started.

Which single do you feel will help breakthrough for you? Either “One Day” or “Ain’t No Way (remix),” I can’t really choose there both good tracks that people feel the most.