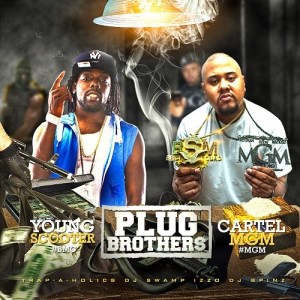 Before returning with Triple F Life a few weeks ago, Waka Flocka Flame founded his company, Brick Squad Monopoly. Waka Flocka Flame has built an incredible roster of talent. Among the artists signed to the label are Young Scooter and Cartel MGM, two rappers making names for themselves.

In recent months, Young Scooter has made numerous appearances alongside Waka Flocka Flame. Young Scooter collaborated with Waka Flocka Flame and Future on his popular track, “Annoying,” last summer. In the year which has passed since then, the new Atlanta hip hop scene has witnessed the emergence of a new star.

Cartel MGM has also experienced a tremendous amount of success over the past year. For a little over a year, Cartel MGM’s songs and videos have gained tremendous popularity. Earlier this year, Cartel MGM released his popular mixtape, Hood Ass Mexikan, another success for the rising rapper.

This week, Young Scooter and Cartel MGM will release their highly-anticipated Plug Brothers mixtape. The project will be hosted by many of the biggest figures in Atlanta. Trap-A-Holics, DJ Swamp Izzo, and DJ Spinz will share the duties of host on the new release.