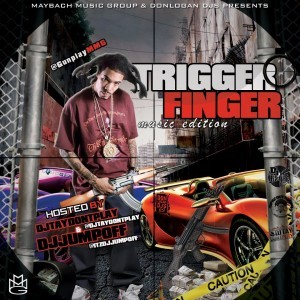 Maybach Music has become the most-popular brand in hip hop as it currently stands. Rick Ross, from day one, has been one of hip hop’s most confident figures, as he predicted a day when he would run the game. Treating his company like a sports franchise, Rick Ross successfully recruited popular free agents to join his roster.

Wale, Meek Mill, and Stalley have all enjoyed much success over the past year and a half. Next week, the Maybach Music album will be released and the opening verse comes from Gunplay. An original member of Maybach Music, Gunplay is a member of Triple Cs.

Gunplay has made moves of his own over the past few months. Currently, Gunplay is preparing a number of projects. In recent interviews, he has discussed Bogota and his other project, 106 & Snort. Recently, however, his Don Logan DJs, DJ Tay Don’t Play and DJ Jumpoff announced they would be hosting Gunplay’s Trigger Finger (Music Edition).

The project does not have a release date, but will be coming soon.