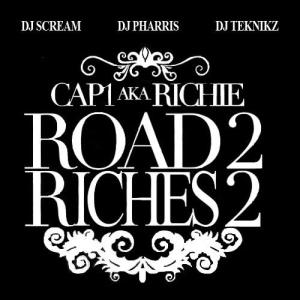 Though he is a native of Chicago, Cap1 is having a major impact on the Atlanta hip hop scene. Cap1 hit the mixtape scene hard with his initial Road 2 Riches mixtape, released last fall. The mixtape was met with positive feedback and Cap1 has continued his quest to top the rap game.

Cap1 is definitely surrounding himself with the right people. Recently, Cap1 has been working closely with 2 Chainz. Before his own solo success, 2 Chainz was considered by many to have already enjoyed his fifteen minutes of fame. Ignoring those thoughts, 2 Chainz began releasing mixtapes and songs, earning a record deal.

Forming a bond with 2 Chainz, Cap1 is hoping for similar success. The summer is here and Cap1 is hoping to dominate. With new music being released, Cap1 intends to cap it off with his Road 2 Riches 2 mixtape. The project will be hosted by DJ Scream, DJ Pharris, and DJ Teknikz, three of the biggest DJs in Atlanta.