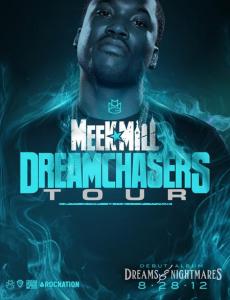 Meek Mill was all set to go on tour in Europe, before he found himself unable to fly overseas, due to lingering legal issues. Before signing with Rick Ross’ Maybach Music, Meek Mill was in and out of legal trouble. For a brief period of time, Meek Mill was signed to T.I.’s Grand Hustle. But, the two could never connect because both were having trouble with the law.

Since moving on, Meek Mill has experienced much success with Maybach Music. On the strength of his mixtapes and his appearances on major songs and the MMG album, Meek Mill became one of the biggest rappers in the game. Meek Mill has gone on to sign major deals, recently signing with Roc Nation for management.

Though his European tour was a no-go, Meek Mill will deliver an American tour, making appearances throughout the United States. After his mixtape success built him a cult following, the Philadelphia emcee gained mainstream fame. Now, his first headlining tour is set to take place, starting in Denver on August 2.

HHV Exclusive: Young Breed talks “Self Made 2,” Maybach Music family, and solo material
Lil Wayne talks “I Am Not a Human Being 2” with MTV News [VIDEO]