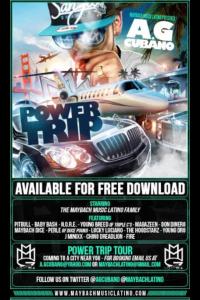 Maybach Music Latino has been putting in work for nearly two years. Since the formation of the company, they have been working hard to live up to their name. The first official release from Maybach Music Latino, AG Cubano’s Power Trip, did not disappoint. AG Cubano’s first project released under the MMG banner has been a commercial and critical success.

Before he returns to the studio to record the following Power mixtapes, AG Cubano will go out and meet his fans. Though a native of the Bay Area, AG Cubano has found a second home in Miami and the city supports him as if he is a local. AG Cubano’s fan base is relatively large in both areas, but is also growing worldwide.

With a successful mixtape out and a growing fan base, AG Cubano is preparing his Power Trip tour, performing the singles off the project. The entire Maybach Music Latino will be on the tour, along with other MMG artists, Young Breed and Magazeen. Other artists included on the tour includes legends, such as N.O.R.E. and Pitbull.