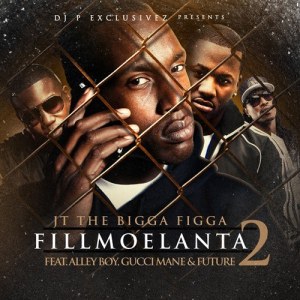 JT The Bigga Figga for years has delivered many classic mixtapes. On Fillmoelanta 2, he proves he has only gotten better with this time. Teaming up with DJ P Exclusives, the West Coast legend has a number of popular Atlanta artists on his new project. On the mixtape, both longtime Atlanta artists and newcomers are featured.

Among the Atlanta artists featured on Fillmoelanta 2 is Future, the 2011 breakout rap star from Atlanta, longtime Atlanta figure, Gucci Mane, and popular newcomer, Alley Boy. JT The Bigga Figga shares multiple songs with all three artists throughout the mixtape.

Released yesterday, Fillmoelanta 2 has already struck a chord with fans, becoming highly popular and is currently trending on Twitter.