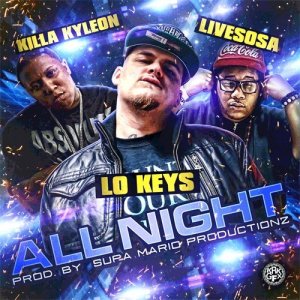 Recently, Lo Keys has proven to be one of the most-popular rising rappers in the game. Hailing from North Carolina, which is still feeling the aftershock of J. Cole’s strong debut, Lo Keys has positioned himself as next in line. Among the big names who Lo Keys has collaborated with include French Montana.

Lo Keys is prepared to add more big names to this list, as he continues his transformation into a big name, himself. With his American Greed mixtape set for release in July, Lo Keys has more singles planned to be released. These singles will boast more high-profile collaborations.

The next single from Lo Keys, “All Night,” will be released tomorrow. Killa Kyleon, the popular Houston emcee, will be featured on the track, alongside Livesosa. Supa Mario Productions put the track together. Lo Keys will continue his domination with tomorrow’s release of “All Night.”