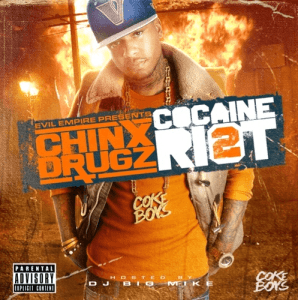 What the streets of New York City have known for years is what the world is just beginning to learn. French Montana has been one of the most-popular mixtape rappers in New York City. After four years of releasing street singles, French Montana finally broke into the mainstream, linking up with Diddy and Rick Ross, though he previously worked with Akon.

French Montana has since become an undeniable star, as he is currently working alongside the biggest figures in the game. Though he is now a Bad Boy Records’ artist, the Coke Boys are still French Montana’s crew. The Coke Boys have become legends on the New York mixtape scene. Chinx Drugz has enjoyed the spotlight, being featured on French Montana’s high-profile music.

However, Chinx Drugz is preparing his own run in the spotlight. Following the release of Niggas Wit Coke, the Coke Boys are releasing their solo projects. Chinx Drugz has linked with Evil Empire and DJ Big Mike for his upcoming summer mixtape, Cocaine Riot 2. While there is no release date for Cocaine Riot 2, the project will be released before the end of the summer. Those who are familiar with the Coke Boys are anticipating the release of the new mixtape and Chinx Drugz is eager to show the hip hop world what he is made of.