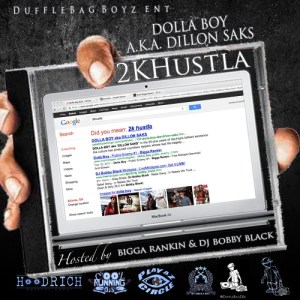 In 2007, Dolla Boy and Tity Boi (2 Chainz) gained their fifteen minutes of fame with the “Duffle Bag Boy” single, featuring Lil Wayne. For years, the duo operated under the ever-popular Disturbing tha Peace label, owned by Ludacris. Over the next four years, the two remained in the background.

Tity Boi changed his name to 2 Chainz last summer and became one of the hottest new rappers in the game. While 2 Chainz was becoming a star, Dolla Boy was still putting things together. Dolla Boy is officially ready for his own run in the spotlight and he initially turned to 2 Chainz for his lead single, “PayCation.”

“PayCation” served as the launch of Dolla Boy’s 2K Hustla mixtape, which was released earlier today. Dolla Boy turned to popular mixtape figures, Bigga Rankin along with DJ Bobby Black for this mixtape. Over the past few months, Dolla Boy has been building and now he is ready for his run on top of the game.

In preparing his run, Dolla Boy has taken the route of 2 Chainz and has changed his name to Dillon Saks, saying he is only Dolla Boy for group purposes. Also, like his rhyming partner, Dillon Saks has bossed up, now the head of his own Duffle Bag Boy Entertainment, which released the new mixtape. A label head and one of the most-popular, rising, rappers in the game, Dillon Saks will dominate the game as a solo artist, but will still maintain close ties to 2 Chainz/Tity Boi.