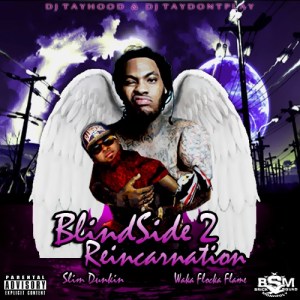 Celebrating the release of Triple F Life today, Waka Flocka Flame has regained his position in the game and reached new peaks. There is no denying the position which is held by Waka Flocka Flame. However, this win comes bitter-sweet for the popular emcee.

Last December, Brick Squad Monopoly artist, Slim Dunkin was murdered in Atlanta by a fellow rapper. Slim Dunkin had released music throughout 2011 and was preparing to unleash new music in 2012. As he geared up for his run at superstardom, his life was taken.

Slim Dunkin is far from forgotten even though he is gone. Many figures in the hip hop community have shown their support for the deceased rapper. Recently, two popular rising DJs of the same name, DJ Tay Hood and DJ Tay Don’t Play, put together a compilation which honors Slim Dunkin. The name of their compilation project is Blindside 2: Reincarnation and it features some newer and unreleased tracks from both Slim Dunkin and Waka Flocka Flame.