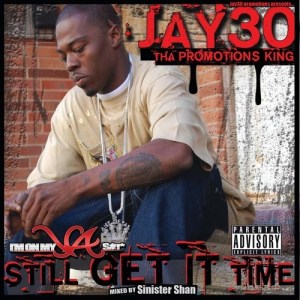 Those in Richmond, Virginia primarily know Jay30 as the promoter and the founder of the Show Your Skills Showcase. Jay30 has primarily been a promoter throughout his career, but he has experimented with rap. Over the years, Jay30’s work ethic has been compared to that of Master P.

Two years ago, it appeared as if Jay30 would indeed become the next Master P in more ways than one. Already having great business savvy, Jay30 was impacting the rap game. In hopes of putting the Richmond, Virginia hip hop scene on the map, he released his mixtape, Still Get it Time.

Because of his reputation, Richmond supported the project. Even though Jay30 is more focused on his business endeavors more than his music, he still thinks back to this period of time. For Jay30 and those around him, even though the project was released two years ago, it is Still Get it Time.

Such artists as We the Best’s Red Rum are featured on the mixtape.