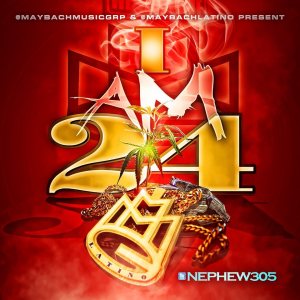 The year of 2012 has played out, thus far, with Maybach Music Group picking up where they left off the year before. Announced two years ago, Maybach Music Latino has been making big moves. Currently, the label is fresh off the release of the AG Cubano mixtape, Power Trip.

While AG Cubano is still pushing his mixtape, Maybach Music Latino is currently preparing to present their next artist. Featured on Power Trip, Nephew is now taking the spotlight for himself. Earlier today, the Maybach Music Latino star revealed the artwork for his #IAm24 mixtape.

There is currently no release date for Nephew’s #IAm24. However, promotion for the project has already begun. The Maybach Music Latino team has pulled together and they have started work on the project. Nephew is gearing up for a summer run for the project and will soon release new music from the mixtape.