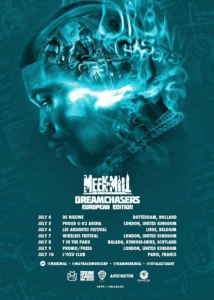 The transition has begun for Meek Mill, as he wraps up his Dreams & Nightmares album. Meek Mill has dominated the mixtape scene for years. His mixtape domination led him to the Maybach Music movement, headed by Rick Ross. Once Meek Mill joined the team, he was able to build upon his mixtape fan base.

In addition to expanding his own fan base, Meek Mill made the Philadelphia hip hop scene relevant once again. Meek Mill has tracks with a number of legendary Philadelphia artists, among those his collaborator on “House Party,” Young Chris. Now, Meek Mill can also boast about his first official single, “Amen,” originally included on Dreamchasers 2.

Meek Mill will be performing “Amen,” along with a number of his other singles, when he goes over to Europe to begin his Dreamchasers European tour. Previously, Meek Mill has visited Europe, doing performances with Rick Ross and Maybach Music. This time around, Meek Mill is the headliner.