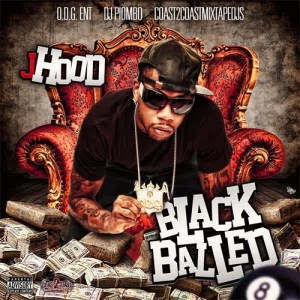 ODG leader, J-Hood is back in the studio, completing a new project. Over the past four years, J-Hood has been one of the more dominant mixtape rappers in the game. Now, J-Hood is back at it.

Originally, a young J-Hood was selected by Jadakiss, Styles P, and
Sheek Louch to join their then-newly formed D-Block movement. The crew released
one album together and remained relevant through mixtapes. In 2007, however, the relationship soured and J-Hood started his own movement.

Leaving D-Block proved to be more difficult than J-Hood predicted. A contract dispute ensued, which left J-Hood in a tough position. The young emcee pulled through, however, and is one of New York’s popular rising rappers. Now, J-Hood is preparing his latest project, Blackballed, for release in a few weeks, on June 18.