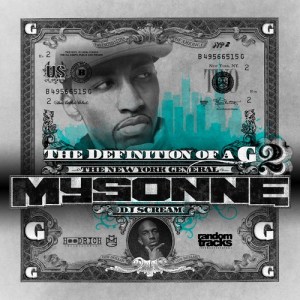 A little over a decade ago, Mysonne was signed to Def Jam and on the brink of becoming hip hop’s new star. At the time, Def Jam was basking in the success of their major three artists, Jay-Z, DMX, and Ja Rule. Quickly becoming one of the most-successful record labels in hip hop history, Def Jam sought to expand with their signing of Mysonne.

Mysonne became one of the most-popular rappers on the streets of New York City in the late 1990s. The run came to a dramatic conclusion when Mysonne ended up signed to Def Jam. But, things fell apart when Mysonne was sent to prison and spent seven years behind bars. With Mysonne behind bars, he was forced to sit on the sidelines.

Over the past few years, Mysonne has found success releasing music on the internet, as his music videos land on numerous hip hop websites. Much like the late 1990s, the mixtapes also play a major role in the success for Mysonne. On his latest mixtape, Mysonne went all out. The name of the project is The Definition of a G, which has been in the works for nearly two years. The mixtape boasts collaborations with many of the big names on the New York hip hop scene and is hosted by Maybach Music’s in-house DJ, DJ Scream.

Among those featured on the mixtape are Game, Jadakiss, and Styles P.