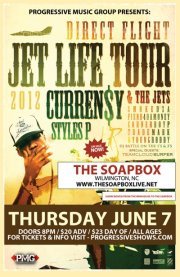 Today is the big day for Curren$y, who released his new album, The Stoned Immaculate today. A represntative of New Orleans, Curren$y was initially signed to Young Money. After waiting a few years for a release date, Curren$y left the label. In 2010, Curren$y joined forces with Damon Dash, who he is currently battling in court.

Curren$y is now signed to Warner Bros. Records and has become one of the most-popular names in the game. Everyone from Southern rappers to New York figures have worked with Curren$y, who is able to go bar-for-bar with anyone. Among the New York rappers who has enjoyed working with Curren$y is the ever-popular Styles P.

A little over a month ago, Curren$y launched the Jet Life tour, which Styles P is also featured on. In a couple of days, the two emcees will be taking their act to North Carolina. Curren$y and Styles P will be performing live at The Soapbox in Wilmington, North Carolina. Their performance of their collaborations and other songs in their discography comes courtesy of the Progressive Music Group.

Warming up the crowd will be rising independent artist, Chox-Mak.