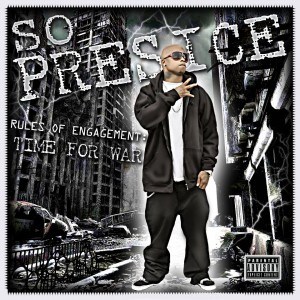 Following years of stagnation, the Los Angeles scene became home to several new rap stars in 2011. The Top Dawg Ent. roster was full of rappers who had been working hard for years to gain stardom. All of their work paid off late in 2010 and into 2011, as Kendrick Lamar helped gain the label a deal with Interscope Records.

The Top Dawg members, Kendrick Lamar, ScHoolboy Q, Jay Rock, and Ab-Soul have not been the only Los Angeles rappers to have success. Others have included Kid Ink, the popular Young Money emcee, Tyga, YG, and many more. While Los Angeles enjoyed a strong comeback, So Presice decided to claim his spot.

So Presice is not a newcomer, as he has been surrounded by the industry for well over a decade. In a game where nothing is handed off, So Presice is claiming his spot and going back to the streets to do it. Currently, the Los Angeles rapper is working on his debut album, but first he is delivering a new mixtape.

Rules of Engagement: Time for War is the name of the new project So Presice has in the works. The mixtape will be hosted by popular rising figure, DJ YRS Jerzy. In the past, So Presice has had mixtapes hosted by DJ YRS Jerzy, which were met with strong results. The two spoke on their chemistry earlier, with So Presice saying the DJ YRS Jerzy was the only person he wanted to host any of his mixtape releases.

This summer, So Presice plans to unleash his new project to the masses. So Presice has worked with a number of big names, some of which may appear on the new mixtape.