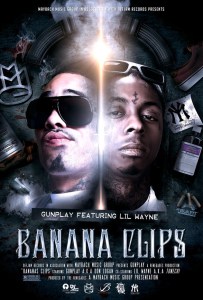 As he stated during his conversation with Hip Hop Vibe this past Monday, Gunplay has a lot in the works. One of the original members of Maybach Music, Gunplay has made major moves throughout the early months of 2012. Now, with the summer approaching, Gunplay is ready to show the world what he has been working on.

Gunplay has already delivered his Kendrick Lamar collaboration, “Cartoons & Cereal,” with much more in the works. However, Kendrick Lamar was not the only big collaboration Gunplay had in mind. The Miami rapper has also been in the studio with Lil Tunechi, still better known to the world as Lil Wayne.

Lil Wayne gave Gunplay a boost for his new single, “Banana Clip.” The single is expected to have a major impact on the summer and will be released on June 4. Aside from the new single, Gunplay is still preparing to release both Bogotai and 106 & Snort. Over the past few months, Gunplay has built a rather large buzz in his own right, as he is laying the groundwork for his debut album.