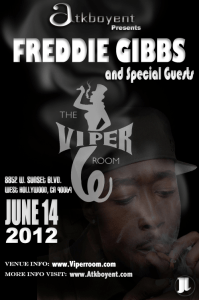 With Young Jeezy nowhere in sight, Corporate Thugz Entertainment had been long forgotten as 2011 entered its spring months. Despite Young Jeezy and his movement being out of the public eye, moves were still being made. Young Jeezy had been meeting with Gary, Indiana rapper, Freddie Gibbs, and ended up signing him to his CTE label.

Immediately, the popular mixtape rapper, Freddie Gibbs, put Corporate Thugz on his back and continued releasing popular music. In making his media rounds, Freddie Gibbs ruffled feathers, calling a number of rappers out. Freddie Gibbs shocked many when he went directly at Rick Ross, who has been trading jabs with Young Jeezy for some time.

Freddie Gibbs has remained one of the most-popular rappers in the game. Recently, Freddie Gibbs was recruited by Atkboy Ent. to perform at The Viper Room in Los Angeles on June 14. The popular rapper will perform a number of his singles, as he celebrates his birthday. A number of special guests will also be in attendance.

Those interested in attending the event can order their tickets here.