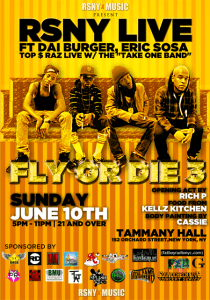 Among the new hip hop talent from New York City is the foursome of RSNY. The group calls themselves the “New Era” of New York hip hop. Even with New York City being the birthplace of hip hop, via The Bronx, many agreed scene had grown stagnant. RSNY, along with many others, such as the popular French Montana, A$AP Rocky, and Denzil Porter have also gained popularity.

RSNY released their Fly or Die 3 mixtape earlier this year. Fly or Die 3 has easily become their most-successful release, to date. The group has been met with much success, being co-signed by the legendary Bootsy Collins. With everything looking up for RSNY, they continue to record new music for their fans.

The foursome of RSNY will be heating up Tammany Hall in New York City on June 10 of this year, when they deliver with their Fly or Die 3 concert. RSNY will perform some of their earlier and current music, along with debuting a number of new songs. Also performing at the Fly or Die 3 concert will be Dai Burger, Eric Sosa, and Top $ Daz.

50 Cent: “The Lost Tape” special with DJ Drama on Shade 45 [AUDIO]
Rick Ross, Drake, and French Montana on the “Pop That” set [PHOTO]