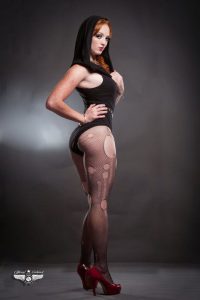 Knowing the right time and right place to do things makes all the difference in the world. No matter the activity, timing is everything. Ladie Redd understands this, as she is working towards reaching her goals in life. Loving to be in front of the camera since she was a child, Ladie Redd developed a passion for modeling.

Focusing back on timing, Ladie Redd feels the time is now to fully launch her modeling career, as her native city, Jacksonville, North Carolina is not exactly known for their modeling scene. Currently, Ladie Redd has the chance to become one of the few models from the city who works in the city. In addition to modeling, Ladie Redd also does photography.

A fun-loving lady, Ladie Redd admits she is still learning more about modeling. Understanding it is all about personality; Ladie Redd has no issues with being herself in front of the camera. In a city with a burgeoning entertainment scene, Ladie Redd is quickly establishing herself as a star. She discussed the moves she is making with her career and her future goals in her Hottie of the Week feature on Hip Hop Vibe.

Coming from a market not particularly known for its entertainment industry, do you feel this is an advantage or disadvantage? Right now, it is a disadvantage for me, because I am at the time in my career where the world needs to know who Ladie Redd is and I can only do so much from here. It was definitely an advantage when I first started, because I knew a lot of people who did different things that all were willing to help me progress as a model. Jacksonville has a lot of unseen talent. I just hope that I, as well as the people that have helped me, don’t go unnoticed.

Through the internet, geographic location matters less and less, it all weighs on the talent, itself, how do you separate yourself from other models? Every model is different in some way, using your “uniqueness” is what places you one step ahead of the others. What separates me is the way I see the world, my love for variety, how I educate myself and the fact I am a fast learner.

What would you consider your greatest physical asset? Though I have been complimented and/or have been told by others what they thought my greatest asset was, I believe my greatest asset would have to be my skin. I am very comfortable in my own skin, which is very important in this industry. As well, the fact that there aren’t many people who have freckles and those that do either love them or hate them. While some spend time trying to cover their freckles, I embrace mine. It is what helps make the person I am on the outside.

How do you feel about the direction your career has taken, at this point? As of right now, it is steady, granted I am not anywhere near where I wanna be in my career, but I know my hard work is going to pay off sooner rather than later.

Not only are you modeling, you have also gotten into photography, can you explain that journey? I have always loved taking pictures, whether it was of myself or of others, just never had a professional camera until recently at the end of 2011 (thank you mom ). I have taken a couple photography classes, but mostly everything I know I learned on my own or received from fellow photographers. I see everything in my daily life the way it could look like as a captured image. It is going well so far, and I’m just hoping for the best.

Can you explain your opinion about the treatment of women in the entertainment industry? Honestly, I don’t feel it is how women are treated, but more how some allow themselves to be treated. The type of ways, and actions, a woman allows for herself professionally makes all the difference. Granted most of us are all here doing what we love and getting paid to do it, but if you don’t agree with the way something is done speak up, have set standards and don’t degrade yourself for anybody or anything.

Are you okay with primarily being viewed as “eye candy?” I have taken into consideration that would be a word spoken by some. Even may be an image I may portray. I figure, as long as carry myself to my expectations and keep my moral standards I see nothing wrong with it. Eye candy can mean so many different things to different people because everyone has different taste.

What do you see for yourself in the future at the rate you are going? Modeling full-time and traveling more. Living my life. I can’t wait to actually do something I love full-time and get paid for it. I can’t predict the future, but I am defintely doing things to help my future be in my favor.

How many photo shoots have you been a part of? Wow, let’s see. I’ve been a part of lots of shoots on an amateur level. Any model will tell you in the beginning stages to now, you can end up in shoots while you’re helping, at Shows, at events, sometimes even by accident! But my own shoots, I would say 200+. That isn’t even counting shoots I’ve done with being behind the camera. I love to get a shoot done anytime I can and anytime that there is a photographer available . I also have helped a lot of my friends that are aspiring models or are just getting pictures taken with ideas and/or poses.

Overall, what is your mission? To become a top model in the industry, stay true to myself, and always give 150% in everything I do. Also, once I am established I plan on helping more and more people achieve their dreams as well. Some of the mottos I go by are: ‘’Everything happens for a reason” and “Dream Big, Live Bigger.” 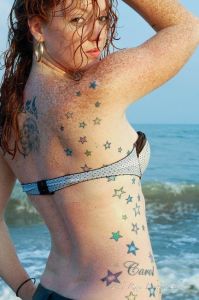 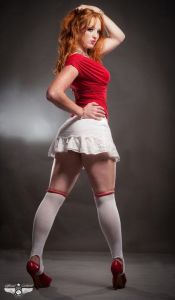 Hottie of the Week: Elicia Solis
Faith Rayah to be the exclusive model for Ottawa Valley Motorcycle/Tattoo Show