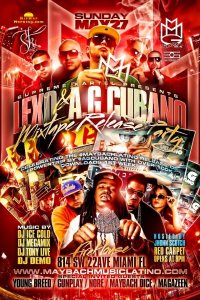 For Maybach Music, their lifestyle consists of working hard and playing hard. AG Cubano worked on the Power Trip project for nearly a year and now the celebration begins. This weekend, on May 27, AG Cubano, Maybach Music Latino, and Lexo will celebrate the release of Power Trip. The event will be provided by Supreme Kartel.

AG Cubano’s new released had over 100,000 downloads within a week of being released, an incredible feat for a mixtape. But, given the mixtape numbers done by Maybach Music, strong downloads are nothing new. DJ Ice Cold, DJ Megamix, DJ Tony Live, and DJ Demo will be providing the music at the event and appearances from Young Breed, Gunplay, Magazeen, and Maybach Dice will take place.