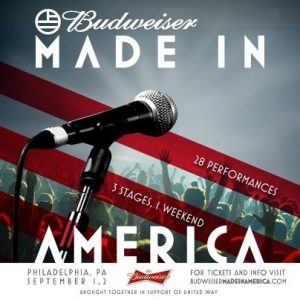 Earlier this month, Jay-Z revealed he would be performing a two-day set in Philadelphia, which was revealed to be the “Made in America” festival. Initially, the focus was not on the Jay-Z performance, but instead on Freeway being in the background. Given the way things have gone for Jay-Z and Beanie Sigel, many felt as if there was underlying tension between Jay-Z and Freeway.

Freeway immediately spoke out, voicing his support for Jay-Z. The Philadelphia emcee explained he was in the background, supporting his friend. After Freeway diffused rumors of tension, the focus on the “Made in America” festival began to sink in with the fans. On September 1 and 2, Jay-Z will be performing his long list of hit singles.

However, Jay-Z will not be the only performer, as he recently released the lineup of performers who will also attend the festival. Tomorrow, tickets for the event will go on sale, as many of the biggest musical entertainers will be in attendance. Among the performers will be Maybach Music’s trio, Rick Ross, Wale, and Meek Mill, Odd Future, D’Angelo, Pearl Jam, Skrillex, Miiike Snow, Afrojack, Calvin Harris, Passion Pit, Santigold, X, Dirty Projectors, Janelle Monae, Prince Royce, Rita Ora, Savoy, and The Knocks.