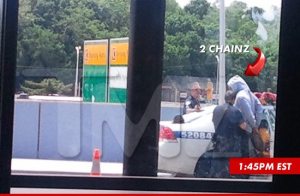 2 Chainz was recently in New York and preparing to arrive in North Carolina for a performance, when his smooth run hit a bump. The Atlanta rapper was arrested, according to TMZ. While at the LaGuardia Airport in New York, 2 Chainz was arrested when brass knuckles were found in his bag.

Upon being hauled out of the airport, 2 Chainz was sent to jail and charged with a misdemeanor possession of a criminal weapon.