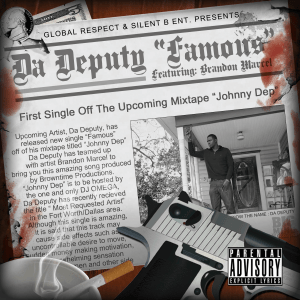 On the Rise alum, Da Deputy is one of the most-popular up-and-coming rappers in the Texas area. Geographically the biggest state in the United States, Texas’ hip hop scene is still rather undeveloped. There is talent throughout the state, but the only emphasis has been placed upon Houston.

Da Deputy proudly represents Fort Worth and the overall Dallas area and has released a series of popular mixtapes. Now, Da Deputy is back in the studio and putting the finishing touches on his Johnny Dep mixtape. The new release will be hosted by DJ Omega, the official DJ for Wale.

With his new mixtape on the way, Da Deputy is preparing the promotion of the project. This Friday, Da Deputy will release the first single from Johnny Dep, which is called “Famous.” At the close of the work week, for fans of Da Deputy, all roads will lead to Hip Hop Vibe for the release of his new single.