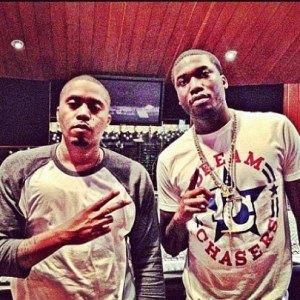 Last week, an image surfaced of Nas and Meek Mill in the studio. Both emcees have been among the most-discussed of the year. Following a hiatus, Nas is back and he has embraced the Maybach Music movement. Last fall, Nas collaborated with Rick Ross on “It’s a Tower Heist” and he was also featured on Rich Forever. Nas has worked with Wale on Tyga’s “Kings and Queens,” and is now working with Meek Mill.

Maybach Music’s Philadelphia representative recently broke his silence on the upcoming collaboration with Nas. Meek Mill is currently working on his debut album, titled Dreams & Nightmares. With the album set for an August release date, Meek Mill has three months to complete his album. Many are anticipating his upcoming work with Nas.

Meek Mill discussed the photograph of himself with Nas and confirmed they were working on a collaboration. He revealed the two came together for a track, which will be featured on Dreams & Nightmares, which is called “Maybach Curtains.”