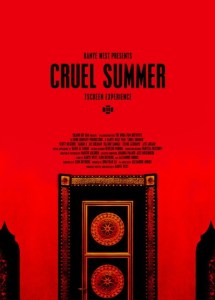 After watching the success of Rick Ross and Maybach Music, many boutique record labels began operating as crews. Among the first was Kanye West’s G.O.O.D. Music, which was a little more than a production company with artists before signing a distribution deal with Def Jam. Upon signing the deal with Def Jam, all the G.O.O.D. artists were moved under the same umbrella, as Big Sean, the current franchise player, was already signed to a Def Jam deal.

During the 2011 promotional run for Big Sean, a G.O.O.D. Music compilation album was announced for a 2012 release date. Kanye West was promoting Watch the Throne, with Jay-Z, at the time, but was heavily involved in G.O.O.D. Music business, also. Aside from the release of his 2010 comeback album, My Beautiful Dark Twisted Fantasy, Kanye West has been away from the spotlight. Now dating Kim Kardashian and releasing new music, he is obviously back.

Kanye West recently was in Cannes, reportedly shooting a short film. Nothing more was said about this film and Big Sean was mum when he was asked about it. Earlier this morning, however, a press release revealed the film is in the works and is named Cruel Summer. With the G.O.O.D. Music compilation album in the works, it will also boast the same title. The film will be released on May 23, 2012, but the album has yet to have a release date.