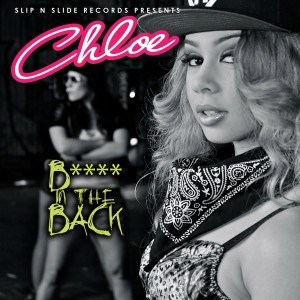 Moving to Los Angeles and networking soon led to Chloe holding meetings with executives from Slip-N-Slide Records. Soon, the legendary label added her to their roster. Since joining Slip-N-Slide, Chloe has not disappointed. Fresh off the release of her hit single, “Bitch in the Back,” Chloe is preparing to release her upcoming mixtape, Hollywood’s Playground.

Earlier today, Chloe spoke, exclusively, with Hip Hop Vibe about the success of her new music, her new label home, and her future plans.

How did the “Bitch in the Back” single come together? It all happened naturally, I got in the studio with Donnie Stantz and Rockie Diamond and met my producer, Tez, for the first time. We vibed out, I told him what I wanted, we wrote it, and came out with a banger. I told them what I was looking for and we made a hit.

Are you surprised about the success of the single? No. Not to sound snobby, but not really. I love that song and I knew it would be the perfect song to introduce myself to the world. The feedback I got was what I was looking for, the “hell yeah.”

What was the concept behind the music video for the song? I wanted to keep it really simple. The song is my initiation into the game, so I wanted to keep it as simple as possible. I wanted to wear the bathing suit to represent being young and sexy, but not really to show off my body. I wanted to have that look and be in front of a nice car, the Bentley. Thanks to Ben Griffin for making an amazing video that showcased what I wanted.

So, how long have you been making music? I have been on things like the choir my whole life. Right after high school, I began doing this professionally, so it has been two or three years. My stepdad had studio equipment and I got in the studio and made my first song and it is something I wanted to do.

How did you run across Slip-N-Slide Records? My manager, Mykel Monroe, was friends with an A&R, Pize, over there. He sent them my music and things have been going well ever since.

In a span of only two years, you have gone from recording with your stepdad to being signed to Slip-N-Slide, how does that feel? Amazing. It only goes to show you can really do everything you want to. Go after your dreams. I dreamed of being in the industry, I moved to Los Angeles and then I was signed two months ago. Less than a year after making the move, I got signed and Slip-N-Slide supports me. It usually takes people a long time, but this was not the case for me, so I appreciate it. I want to pay homage to Nicki Minaj, because she was buzzing when I started making music because every label wanted a pretty “rapper girl.”

Would you say you are inspired by Nicki Minaj? Yes, definitely. When “Itty Bitty Piggy” came out, it helped me find me. She is the femcee I relate with, the older generation is inspired by Lil’ Kim, Remy Ma, and Foxy Brown, but she is the one I look up to as far as female emcees go. I want to be just as good, if not better, than her.

What comes next, after “Bitch in the Back” for you? Well, we have a few more videos which are going to drop and a new mixtape, Hollywood’s Playground, which will come this summer. It details my life since moving to Hollywood. Every day of my life out here deals with music, no matter what part of Los Angeles I am in. Expect a new, fresh, sound, a fresh summer.

Can you name some of the other artists you will be working with? Right now, that is up in the air. I have some things set up with some West Coast artists, but we are starting small.