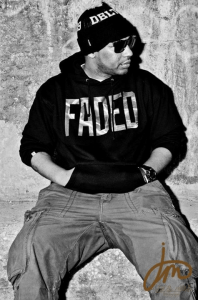 Following in the footsteps of 50 Cent and French Montana, New Yitty has taken over the New York mixtape scene. One of the hottest up-and-coming rappers on the East Coast, Hip Hop Vibe recently spoke to New Yitty as a part of the “On the Rise” series.

While New Yitty’s name may not ring a bell now, it will in a few months. His single, “Work It,” features Jim Jones and Yo Gotti. The song has been placed on several mixtapes and the music video is highly-popular. With one certified hit, New Yitty is churning out more.

New Yitty is a part of a new breed of New York City-area artists taking over the rap game. When looking at the next crop of rap stars, New Yitty is definitely in the conversation. During his interview, New Yitty spoke on this and more.

How did the “Work It” collaboration with Jim Jones and Yo Gotti come about? We got the drop that Yo Gotti was in New York and was going to be able to come to the studio, so I said we should throw him on “Work It.” I already had the beat and the hook, so about a week later, we got up with Jimmy at his studio and he laid his verse down.

The song has become a mixtape favorite, how do you feel about its success? I feel like it still hasn’t gotten the attention it deserves. It’s getting spins across the country, 100,000 plus views on YouTube, it’s been on several hip hop websites, but I still feel like, to be unsigned and to pull off a move like that, it’s flying under the major radar.

Do you see yourself becoming the next big thing in the rap game? I know my potential. I don’t know who is “Next,” but I know I’m going to get my chance to be heard.

With “Work It” already out there and a hit, what do you have coming next? We are about to flood the mixtape circuit with some new freestyles and videos, but song-wise, I’m looking forward to putting out “Mr. 24-7,” “I Ain’t,” and “Gotta Feel Me.” Not in that order, though.

You were recently featured on DJ Tarzan’s King of My City, can you talk about that? Shoutout to DJ Tarzan, Merc Valentine, and the Blok Club DJs. They were actually in that studio session with Yo Gotti. Tarzan believes in me as an artist and the Twenty4Seven Movement, so he made “Work It” the first track and put me on the cover, so salute to him for that.

Will you be on any other upcoming compilations? Well, people hit me up all the time to do things, I’m just very selective about what I do, but there’s always something. I’m on the clock Twenty4Seven!

When will you release your next solo project? Next solo project will probably be “Mr. 24-7,” released around August/September, but I may do a mixtape or two with some DJs in between. I got some extra material laying around.

Do you intend to work with Jim Jones in the future? Yeah, I would work with Jimmy again, I came up listening to the Dipset movement. We don’t have anything lined up right now though.

How do you feel about the overall resurgence of New York rap? I feel like things are up. It’s a few people really doing their thing and there’s a few people that need UPS applications (laughs). We looking good though! I’m gonna make sure of that!