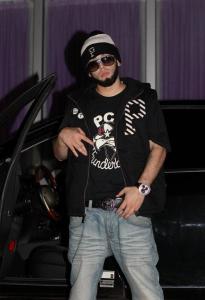 Maybach Music Latino knew they had a star on their hands the minute they signed AG Cubano, the representative of the Bay Area for the label. This week, AG Cubano delivered the first official release from the label in the form of his Power Trip mixtape. Over the past two years, AG Cubano has been working on this mixtape, calling it the biggest project of his career.

Hip Hop Vibe recently spoke to AG Cubano about the recent success of his mixtape and what he has planned for the future.

What was the inspiration for Power Trip? When I came to Miami, I wanted to come up with a title before I even began working on the mixtape. The beats, I had with me, coming from my in-house production team. A lot of those beats, I have had for two years. I had a feel for the mixtape before any of the songs were even made. When I moved to Miami, I spoke with the MML DJ and he told me I need to come up with a title and I told him “power trip.” I took a trip from California to Miami and then “power trippin,” making the moves of a boss. It has that double meaning, first the trip I made and then the moves I have been making.

A lot of praise has come from the flow of the album, how were you able to order the tracks properly? The first few tracks, following the intro, will be the next videos we will be dropping. They will follow a storyline, and this is how we will preceed the album. The first three songs, after the into, will be the first three videos. We wanted them to start off the project with those tracks. With the rest of the album, me and BaRock Urbano put it together like a coach putting together their lineup. We had to put the tracks in the right place and have the strong points at the end. We wanted to keep the flow together, I imagined this thing being like a soundtrack, good music and the beginning of the movie, good music at the end of the music. I compare it to making a lineup for a team or something. A lot of people have told us the project flows like a movie soundtrack and it is good to have balance, let the project go up and down, so the people keep listening and possibly replay it. At the end of the day, we had fifty tracks to choose from, so it was hard to choose, because a lot of good songs did not make the project, because they did not fit the flow of the project. The songs which fit the Power Trip theme are the ones that had to make it. There were three or four songs, which were recorded in the last three or four days. After the trailer dropped, a lot of people jumped on the site, the song with Young Breed and the song with Hoodstarz are among the songs which were dropped right before the release date.

The mixtape game has been very good to Maybach Music, how do you feel your project sticks out among all the releases under the MMG banner? It sticks out, because it is the first official release from Maybach Music Latino this year. Rick Ross retweed my trailer, shout out to him. His retweet and then saying follow Maybach Music Latino brought a lot of publicity to her. There is a lot of hate aimed at Maybach Music Latino, like some people saying Rick Ross doesn’t even fuck with us, but when he told people to follow Maybach Music Latino, a lot of people began jumping on it. I feel like I am coming out on a different platform, I am coming out brand new and they are hearing my product for the first time. Right now, we are brand new and this is the first offering from Maybach Music Latino. This was seven/eight months of grinding and it paid off. Now, a lot of people are excited about the whole Maybach Latino movement and I am among the first to drop. With an official artist from the Latino division dropping, I have the first look over here. In two and a half days, we are at 50,000 downloads, so things are moving. We had no DJ hosting, so this is truly an album, we just released it for free, no tags.

What was it like jumping into the studio with Young Breed? Oh man, Young Breed is one of those real solid street dudes, real recognize real, period. Young Breed has been showing us love from the beginning, showing up at our shows and all that. Breed is what a lot of people wanted to see. Having someone close to Rick Ross and a main MMG rapper was what we needed. Mikey T brought Breed through, BaRock Urbano hit him up too. We had the producer in the studio when we rocked that song, we had him come to the studio and we ran through 20 beats and when Breed heard that one, he said “that’s it.” Young Breed has that family vibe with us, it was more than business and we made the song from scratch. He was feeling the track so much, he even did the hook. We did this project the right way, working with the producers, making songs from scratch, and brought people to the studio to record. It was really from the bottom up. That is something the game is missing, it is too easy to get collaborations done, jump on a verse and email it back. Same thing when Magazeen.

You also had N.O.R.E. on Power Trip, how did that come about? Man, N.O.R.E. is the big bro, he is the ambassador for the Latin community and he lives in Miami. He and BaRock Urbano have known each other for years, they have the mutual respect. I had met N.O.R.E., with Maybach Music Latino, at a number of his events. Over the past few months, we really got to know N.O.R.E. and then it was like “let’s make a track.” He already knew U.B. and then Baby Bash jumped on the record and then N.O.R.E. heard the track and was like “I like the track, dude.” A lot of stuff on the album happened on the spot, even down to the music videos. He called us up and then we did the track. N.O.R.E. is a legend and he loves the art, he blessed us with the verse and then he hung out with us for a while. I grew up listening to him and Capone, a lot of people compare my sound to him. N.O.R.E. always repped for the streets and he embraced his Latino culture. Definitely the biggest tracks of my career, with three platinum artists on the track. The track is being sent out to DJs and we’re trying to get that thing spinning. When people hear N.O.R.E.’s verse, they laugh, because he adds comedy.

How has the reception from the DJs been? It has been crazy bro. A lot of DJs didn’t even know we existed, all different nationalities of DJs are hitting us up. Power Trip is tagless and we have been pushing DJs to take it and do something with it. Every day, non-stop, I have been being hit up by DJs and producers. At the end of the day, you have to deal with the DJs because their job is to push your music. When you link up with the DJ, they are going to help you work. You have to respect that. DJ Imperial was the first DJ to ever deal with me. Something I never forgot was to work with every DJ who comes my way, use any track you want. At the end of the day, they are pushing your music. The DJs are running the internet, so it is important to respect them. There is no longer one million DJs in the street pushing CDs, now they’re online sharing links.

What comes next for AG Cubano? What we got here, we really loaded up with the videos. Maybach Films has been supporting us. Shutah Films and Andy from DNA Films, they have been holding us down. Over the next few months, expect to see me on Worldstar every week. That is the gameplan, to stay out there. We have Maybach Films behind us. We did all the videos before the projects even dropped. Now, with the project out, we have eight videos in the works. When things appear to die down, we will have more videos to drop. The next release from me is Power Move, the sequel to Power Trip, and a third is coming after it, making it a trilogy, with Power Shift being the third. By the time I get there, my profile will be much bigger. I am in the lab working on Power Move and producers from all over the country are wanting to work with me, it’s all about progression. This makes me more confident. I got the formula and we have to keep it rolling. Power Move is coming this fall and Power Shift is coming after that. MMG pushes their mixtapes like albums and their mixtapes truly do numbers. A mixtape track can break months later. Stay pushing your product until the next one drops.