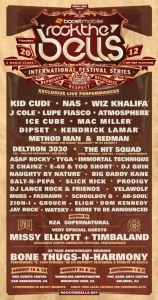 One of the biggest hip hop festivals of the summer is Rock the Bells. The international festival series has given fans access to some of the biggest names in urban music over the years. With the summer of 2012 right around the corner, the lineup for the 2012 festival has been revealed. Many of hip hop’s newer big names will be performing, as will the veterans.

Among the headliners will be Nas, Wiz Khalifa, J. Cole, Atmosphere, Mac Miller, Method Man and Redman, Ice Cube, Kid Cudi, and Kendrick Lamar. Despite his name being on the flyer, Lupe Fiasco said he will not be on the Rock the Bells roster, calling it a typo. Lupe Fiasco not attending does make room for the number of other hip hop artists who will be performing.