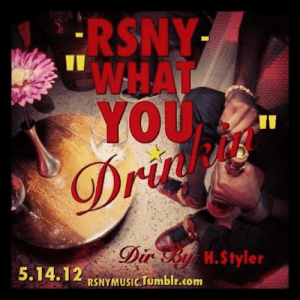 Many have stated the future is now, as hip hop has gone through a massive overhaul in only a few short years. The accessibility of the internet has been a driving factor in this overhaul, leading to many new artists gaining fame without having the support of major labels. Last year, there was an influx of new stars who emerged and the trend has continued this year.

New York group, RSNY, continues this trend, as they call themselves the “New Era” of New York rap. The group has been making major moves for some time, flooding the internet with their music. RSNY is fresh off the release of their Fly or Die 3 mixtape, which spawned the hit single, “I’d Rather Be With You,” featuring Bootsy Collins. The group is now preparing the world for their next hit single.

“What You Drinkin'” was also released as a single and now RSNY is focusing on the promotion of their new single. A music video was recently filmed and RSNY is preparing to release their music video to the world in three days, on May 14, 2012, here on Hip Hop Vibe. The music video was directed by H. $tyler.

Continue Reading
You may also like...
Related Topics:bootsy collins, fly or die 3, h. $tyler, i'd rather be with you, new york city, new york hip hop, rsny, what you drinkin'