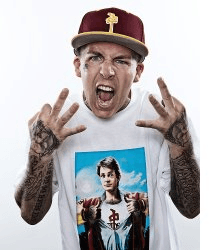 Hip hop is preparing to invade Sweeden, as Madchild, of Swollen Members and Suburban Noize Records, will be performing at the Ozone Rap Battle. There will be a number of known hip hop artists performing at this rap battle. Among the hip hop figures performing will be Krayzie Bone, known for his membership with Bone Thugz-N-Harmony, Crooked I, of Slaughterhouse, and Yukmouth.

In addition to the big name hip hop artists, battle rappers from around the world will be competing in the biggest rap battle in Europe. Battle rappers from Canada, United States, United Kingdom, Sweeden, and other parts of Europe will be performing. Madchild has made a name for himself as a battle rapper and is heading out to Sweeden to show the world.

“I’m excited to go check out this battle, as Sweden is one of my favorite places in Europe,” said Madchild. “I will be there performing on stage and I’m looking forward to taking in all the battles and watching some of the best battle rappers in the world.” Madchild competed in a rap battle for the first time in Toronto, last year. While Madchild is preparing to compete in the Ozone Rap Battle, his focus is on his Dope Sick album, due this summer.

The Ozone Rap Battle will take place tomorrow, May 12, 2012, at Babel nightclub.

Cam’ron and Vado finally deliver the “UNLost Files”
Wiz Khalifa, Big Sean, and Chris Brown on the set of “‘Til I Die”