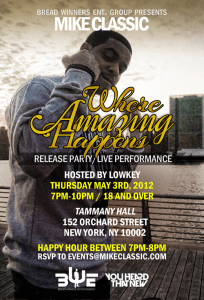 New York City is making a strong comeback in the rap game, due to the efforts of such rappers as Mike Classic. Throughout 2011, Mike Classic worked to build his name and has since become one of the most-popular rising artists in New York City. Signed to Bread Winners Ent., Mike Classic has co-signs from many big names, including French Montana.

Mike Classic had the chance to work with French Montana, who recently rose the ranks, himself, from an independent artist to a major label artist, signing with Bad Boy Records. French Montana is featured on Mike Classic’s mixtape, Where Amazing Happens. The two collaborated on the track called “Whole Different Lane.”

Released a month ago, Where Amazing Happens has become one of the most-popular mixtapes released in 2012. Tonight, Mike Classic and his team, along with many of his fans, will be celebrating the success of the mixtape in New York City. All night, there will be free entry to the Where Amazing Happens mixtape release party at Tammany Hall.