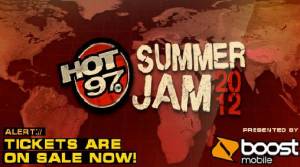 The Hot 97 Summer Jam has become one of the biggest hip hop events of the year. Over a decade ago, Hot 97’s Summer Jam was the platform Jay-Z used to ignite his feud with Nas, which went on for four years. Jay-Z previously performed at Summer Jam and dissed a then-unknown 50 Cent.

Beef has not been the only thing keeping Summer Jam relevant. Hot 97 has longtime been the top hip hop radio station in New York City and surrounding areas. Unknown rappers have become major stars through Hot 97, both radio and Summer Jam. With 2012 continuing the trend of 2011, with a new breed of rappers emerging, the Summer Jam will again be the outlet.

Many performances have been revealed, among them ScHoolboy Q for the pre-show, but now the official list has been revealed.

Read the lineup of Hot 97 Summer Jam 2012 performances below: