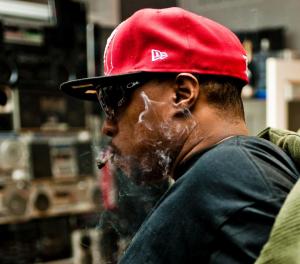 Hip Hop Vibe recently caught up with Dollarmentary, who discussed his highly-successful Green Crack mixtape, his follow-up, America’s Baby, how technology has influenced hip hop, and remaining an independent artist.

Dollarmentary has enjoyed a successful run over the past few months. Last summer, during a previous conversation with Hip Hop Vibe, he warned fans of his new music. His Green Crack mixtape, which was released in March, has become one of the most-popular releases on the streets. The mixtape boasts collaborations with Capone (of CNN), Naughty by Nature’s Treach, Method Man, Sticky Fingaz, and other big names.

With Green Crack being one of the most-popular mixtapes on the internet, it makes one think back to when mixtapes were heavily bootlegged on the streets. While bootleg mixtapes are still prominent, the online hustle is just as, if not more, important. Many new rappers have discovered this and have elevated their careers through the release of online mixtapes. The New York hip hop scene has enjoyed a nice comeback through online mixtapes, as French Montana and A$AP Rocky have built international followings online.

You have enjoyed much success with your Green Crack mixtape, what inspired the new release? The Green Crack mixtape was a collection of songs I recorded from a few years back. The title is Green Crack like a new drug, it is also a new form of weed that is out. Part of my life is up there. Classic joints from me and my people are up there, like with Icadon, Method Man, and Treach. This project really defines who I am. I dropped this is a mixtape, but this is an album, all of the production is original. Vinny Idol handled the production by the way.

How long had you been recording Green Crack? I recorded five new tracks for this project in 2011, but it is a collection of songs I have had in the vault.

What was it like to have the chance to work with all of those legends again? Everyone on that album, I respect. I worked with people I was originally a fan of. I am still a big fan of Method Man and Treach. I am a fan of their music and I told them I wanted to work with them and we made it happen.

You and Method Man go way back right? Right. The Method Man track came about through Icadon, who was working with Redman and Method Man, he introduced me to them. We recorded at D&D Studios and made these hits. Me, Icadon, Method Man, Treach, Redman, all of Brooklyn, Queens, and Long Island was in there. Unfortunately, there was no cameras in there. The track with Method Man was recorded back in 2001, but we decided to put it on Green Crack.

Already, you are releasing music from your next mixtape, America’s Baby? Right. America’s Baby is going to be a classic. A lot of people think Green Crack is new, but I had recorded it before. America’s Baby is all-new material. I am expanding my fan base and I am looking to work with new people. For this project, we are trying to head back to Canada and tour. I want to link with Method Man and Redman again. This project discusses what is going on in the world, everything on the project is new, and I want to show the people some new shit. I just shot the video for “Show You How to Get It.”

Who do you have featured on the new project? On Green Crack, there were a lot of features. On this project, I did a lot of solo tracks and I reserved the collaborations to my in-house team, Space Cadetz, I do have Timbo King on it. I have international production for this project, everyone has a hand in this project. Each song on this project has a message, this will be another album released as a mixtape. A lot of rappers have no meaning behind their songs, but this is not the case with America’s Baby.

Green Crack has been one of the hottest mixtapes on the internet, how do you feel about the evolution of mixtape releases from the streets to the internet? I love it man. My whole history is mixtapes and making CDs in the streets. We still flood the streets in Times Square. When I’m not on tour, I’m in the streets. With the internet taking off the way it has, it has become easier than trying to get music in “mom and pop” stores. The internet is helping, cutting out the labels, keeping me working, and I can release the music faster. It is a lot easier to record music and then release it as a link and having everything printed and pressed. I have sold over 100,000 CDs in the streets and I’m using the internet the same way I did on the streets.

New York City is back on the map in hip hop, how do you feel about this? I feel good. A lot of times when they said New York fell off, a lot of people were not paying attention. The game evolved and left New York and went international. Every area has their time to be on top of the game. It started in New York, so it was bound to leave for a while, but now things are on their way back, but there is talent everywhere now and every artist should be marketing themselves as an international artist. Hip hop is the universal language.

Do you have a favorite rapper out of the new crop of New York rappers? I’m a big fan of French Montana. I put him in the same category as myself. He grinded a little more than me. French Montana is connected with more newer artists, while I work with more veteran emcees. At the end of the day, me and French Montana are both underdogs. The same way he has risen in the game, I will rise. I am going to show people they do not have to stop doing what they are doing, I am independent and proud. Smoke DZA is also doing his thing.

You are currently dominating the mixtapes and running things independently, will you be going major when you release your album? Yeah, if the money’s right. I’ve been doing this my whole life. If I can take care of my family and keep creative control, I’ll do it man. I’ll keep it real. As long as no label is trying to change my style, we can make it happen. They can co-sign me, put me behind their machine, and then the money has to be right. If I get that offer, hell yeah I’d go major.