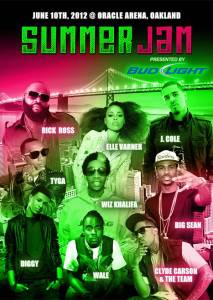 In a month and a half, 106 KMEL is going to heat up the streets of Oakland, bringing some of the biggest hip hop names on the planet together for a series of performances. So far, 2012 has proven to be a very interesting year, with many new names emerging. The stars from previous years have also shined bright and are preparing to release more new material in 2012.

Rick Ross is undoubtedly the most-successful artist of the past two years, being named ‘Man of the Year’ back-to-back times by The Source. Much of Rick Ross’ success comes from the team he assembled, showing he could also be ‘Executive of the Year’ if such an award existed. The Maybach Music team had incredible success, as Wale has also had strong commercial appeal.

Big Sean, J. Cole, and Wiz Khalifa were among the new artists to emerge in 2011, following years of being stuck on the mixtape level. At different periods of time in 2011, all three rappers were considered to be the most-popular new artist. Diggy Simmons is the biggest new artist of 2012 so far, but does have competition from many others.

Regardless, Rick Ross, Wale, Big Sean, J. Cole, Wiz Khalifa, Diggy Simmons, along with Elle Varner and Clyde Carson & The Team will be headlining 106 KMEL’s Summer Jam. The event will take place on June 10, 2012 and will take place at the home of the Golden State Warriors in the Oracle Arena.