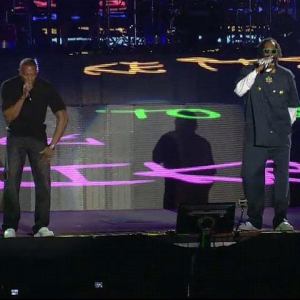 It is hard to imagine, but at one point Dr. Dre was the most-popular rapper in the game, often making television appearances and did several magazine interviews. From the beginning, though, Dr. Dre’s intention was to be behind the scenes. Years after his time in the public eye, fans are still waiting on more music from Dr. Dre.

While fans wait for the release of Detox, they know they are lucky when he makes appearances, period. Fans knew they were in store for something incredible when Dr. Dre was named to the list of performers at Coachella 2012. Many expected to hear something new off Detox, instead Dr. Dre brought Tupac Shakur back to life.

With everyone so wrapped up in the Tupac hologram saga, it was easy to overlook 50 Cent taking the stage with Dr. Dre, officially ending their feud. Others who performed during Dr. Dre’s sets included Eminem, Kurupt, Kendrick Lamar, and Snoop Dogg. Taking up two weekends, Coachella 2012 is officially over.

Dr. Dre offered thanks to the Coachella fans and he finally spoke on the number of rumors regarding the hologram of Tupac Shakur.