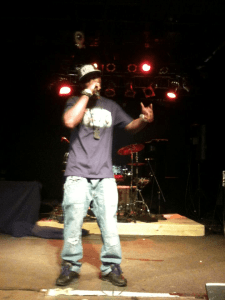 There has been a lot of discussion about the breakout stars of 2011. Before the halfway point of 2012, there have already been an increasing number of up-and-coming stars, among them Chox-Mak. The spotlight is currently on North Carolina, following the success of J. Cole. Chox-Mak is proving the Tar Heel state is far from a one hit wonder.

During the mid-winter, Chox-Mak released a single set for summer, “The One For Me.” Since its February release, “The One For Me,” which features up-and-coming producer, N-Tone, has become one of the most-popular singles in Chox-Mak’s native Jacksonville, North Carolina, and surrounding areas. Just because of the local success, Chox-Mak should not be viewed as simply a local artist.

Working with a number of producers in the United Kingdom, Chox-Mak has been receiving plenty of radio play overseas and in stations across the United States. The buzz for the rising emcee has been increasing for some time. Recently, Chox-Mak visitied Coast 97.3 and discussed his upcoming projects, as he has many in the works. There is also footage of a recent performance from Chox-Mak.

Watch Chox-Mak’s interview and performance below:

Continue Reading
You may also like...
Related Topics:chox mak, coast 97.3, j. cole, jacksonville nc, n-tone, north carolina, the one for me