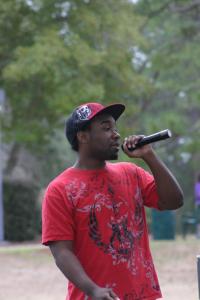 For years, hip hop has been controlled by major corporations who dictated the type of music artists could make. Rappers who wanted more control began creating their own record labels, which were still backed by the major corporations. A few years ago, however, things changed and rappers now have the opportunity to personally build their own fan bases thanks to the internet and the number of social networking sites.

The Vision has been using the internet for years, releasing his music online. A native of Oak Park, Michigan, the up-and-coming artist, now residing in Bainbridge, Georgia, is a jack of several trades. Talented with rapping, singing, songwriting, and photography, there is no way to fully close The Vision out. As a result, he has become a coveted rising artist in the game.

Hoping to expand his base, The Vision is a part of the highly-publicized URock Tour and he is hoping to bring about a change to the rap game, thus his “vision.” Always an artist first and foremost, The Vision is also a fan of the music, which is why he is so determined to change the game. Following a brief conversation with The Vision, he agreed to be featured on Hip Hop Vibe for an exclusive interview.

A multi-talent, what do you consider to be your strongest talent? I believe my strongest talent is the ability to be challenged with a new task, or idea and finding a way to make it work. That’s why everybody that knows me say I grind harder than anyone they know, even though I feel like im just a regular guy trying to make things happen for himself.

How did you pick up so many different crafts? Well it all started with writing for me, everything else developed for me afterward. Poetry turned into rap lines or songs and then eventually I had the urge to hear myself through speakers so I started recording my own music. Basically, if I have an urge to do something, I figure some way to make it happen, thus another craft is picked up.

Which do you identify with more, Southern or Midwest hip hop? I identify most with my own music which is a mix of them both. One reason I created my own style was because I didn’t really fit into any of the life styles being portrayed by either form of hip hop. That’s why my music is different. And that’s the reaction you get when you hear it, it’s just different.

How do you feel about the similarities between the two genres? Last time I checked there weren’t too many similarities at all between the two. Just compare music from artists like Future and Big Sean, and ask yourself how similar they are, or 2 Chainz and Kid Cudi. I believe the fact that there isn’t much of a similarity is what makes my mix able to stand out. And I love both genres the same for that

Technology has built many stars, what connections have you made online? Technology really has been good to me. It allowed me to hook up with people like Heather Victoria of Jamla Records to make music. It even gave me the connections with my two hip-hop brothers Dave Lyric and Anthony King whom I will make music with for the rest of my life.

How did you wind up on the URock Tour? One of the many connections I’ve made happens to be an A&R director for a certain independent label that suggested I sign up for the tour in order to help build my fan base. I did my research, it turned out to be legit and a good move so I sent of my music to the tour directors, they loved it and the rest is history.

Do you feel there will be more opportunities like the URock Tour in the future? I feel like there will always be newer and better opportunities in the future. I have a level of confidence in myself and my music to believe that I CAN NOT go on tour across America without somebody loving what I have to offer as an artist and wanting to help me open more doors in the music industry.

Who have you been working with recently? Recently I have been sticking kind of close to home, finding local artists in my own city and helping them do what they believe they were born to do as well. But of course I am forever working with the two members of my crew R.E.D.(Realize.Every.Dream), Dave Lyric (from Detroit, MI) and Anthony King (Harlem, NY). Also I have a song that’s being worked on now that’s going to feature the lovely Heather Victoria of Jamla Records.

When did you plan to release new music? I just put out an album called “Still Dreamin” it is available now on itunes and spotify. But I have new music in the works so hopefully it won’t be long before I can put a set date on the new projects I have.

Are you a believer in hard work and dedication paying off over time if one never gives up? I honestly try to be a believer of such things but the harsh reality is that someone can work their whole lives without ever seeing the fruit of their labor. Sometimes dedication and hard work is not enough. Nowadays you have to do what it takes to MAKE things pay off, sacrifice and really go through the mud for what you believe in. sometimes things don’t just pay off, you got to go snatch your payoff from life.

Why do you call yourself “The Vision?” I call myself The Vision because I have an idea for the future of hip-hop and its nothing like how it is today. My idea of hip-hops future is more positive, a better influence on the culture, more fun to listen to and less embarrassing to let play in white neighborhoods. I think this culture needs a new vision of hip-hop and I AM that vision.

Over the past few years, hip hop has had an influx of alternative rappers enter the game, do you have a favorite among the new crop of hip hop entertainers? I have a few favorites among them but I would have to say that Mac Miller would be the one that stands out in my mind the most and I have a lot of respect for him and the Thumb up Movement.

What does the future hold for you, business-wise? Business wise I’m also an audio engineer so I will definitely keep that going as far as profiting from music. As far as my own music, I never really thought of it in a business aspect but there are definitely doors open for me right now that could prove very useful for me in the future.

Do you feel as if hip hop is too segregated, due to regions? No, not at all; Music cannot be segregated, it’s universal. The only thing that makes it seem segregated is the people that only choose to listen to one form of hip-hop or the other. I think the different branches of the genre are what make the culture so rich in the first place, without them, everybody would sound the same

Did you have a chance to watch Tupac Shakur perform at Coachella 2012? Yes, I saw it on YouTube

If so, how did you feel about that moment in hip hop? I mean, it’s been known that music and legends never die. And that night at Coachella is where it was proven. They made history, LITTERALLY. I’m proud for my people.

What impact do you hope to leave on, not just the hip hop world, but the overall world, long after you are gone? That’s something I always ask myself before I record a song or before I get on stage. And I have so many different answers for myself as I progress in my music. Right now I want my music to be something people listen to for advice about how to handle a situation, or to help them get over a break up, or even something to jam to while they study for school. But I also want to leave subliminal messages in their minds such as nothing is impossible, you are who you are for a reason, you’re not alone in the world even though you may feel like it and no matter what you do, make sure you realize your every dream.