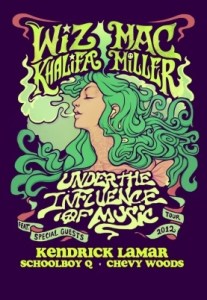 Pittsburgh hip hop has taken over the game. During the early fall of 2010, Wiz Khalifa took his act from the mixtape game all the way to Atlantic Records. For nearly two years, Wiz Khalifa has been dominating the rap game, currently preparing to release his second album, O.N.I.F.C. As Wiz Khalifa was taking over the rap game, Mac Miller was establishing his position in the game, having built a solid internet following.

Last fall, Mac Miller released his debut album, Blue Slide Park. Due to both rappers being young and being from the same city, they are often compared to, and asked about, each other. Despite their success, both rappers are still signed to local Pittsburgh label, Rostrum Records. However, Wiz Khalifa is also the head of his own Taylor Gang label and is signed to Atlantic Records.

The two breakout Pittsburgh stars often rap about being under the influence and partying and now the duo will be taking their act on the road. Later this summer, Wiz Khalifa and Mac Miller will be coming together for their “Under the Influence of Music” tour, which will also feature appearances from Kendrick Lamar, ScHoolboy Q, and Taylor Gang’s Chevy Woods.