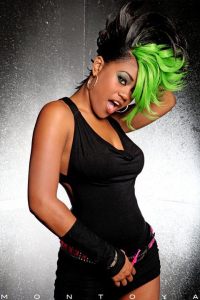 Even overnight sensations have years of hard work behind their success. Mirani Starr, a native of Philadelphia, is currently based in Miami and is on the verge of superstardom. An interesting talent, there is not much Mirani Starr cannot do. A talented model, singer, dancer, and much more, Mirani Starr definitely knows how to put on a show.

While Mirani Starr realized she was a star a decade ago, it took those around her a bit longer to realize her talent. Better late than never, as those close to Mirani Starr know she has the capability of living up to her last name. Since birth, Starr knew she would shine in some way, however, it happened to be in the form of entertainment.

Mirani Starr discussed her background and her goals with Hip Hop Vibe last week, detailing how she got her stage name and her experiences as she pursues her goals.

For those who have trouble spelling your name, tell them how it is correctly spelled and explain where it comes from? Mirani Starr; When I was a lot younger, I spent quite a bit of time in the Spanish community. Mirani (which was actually given to me by a guy who had a crush on me) told me that it meant “beautiful to behold.” I later found out that “Mira a mi” really means “look at me”. (I think I like his interpretation better) (laughs) Starr, was something dubbed on me by my grandmother. She used to say to me ” baby your a star but you have two ‘Rs’ because you are special.”

Many entertainers say they developed their passion at an early age, or it was always in them, when did you truly discover you could not only be an entertainer, but also able to turn your talent into a profit? I think it all started when I was six and I had the opportunity to sing in church. I remixed “Jesus loves Me.” Everyone thought it was really cute. At that moment I thought “I’m a star” and asked my dad for vocal lessons. Unfortunately he told me no.

Professionally, how long have you been doing all that you do? Professionally, I started in 2002. I took myself seriously and felt I was mature enough to know what I wanted and music was it. Before this period, I was still trying to develop my own style.

Dancing, singing, modeling, and acting. Which do you feel is your strongest talent? I will say that singing is my strongest of these talents, however, acting came naturally to me. I remember when going to school in Jamaica, we (my classmates and I) would go to finals and semi-finals and come home with gold and silver medals competing against 30 to 40 schools in acting and dance.

Do you feel your diverse background had anything to do with your diverse range of talent? Yes I do. Coming from a background that equally shared Chinese and Jamaican origins, caused me to learn talents from both cultures and mixed them together creating my own “swag.”

What is your opinion on the many so-called professionals in the game? >A lot of them I love, their music, styles, and talents, along with their contributions to “the game.” While others, I think just do music to make fun of things to lighten the mood either they are professionals.

How has the internet helped you gain followers and connections? Well, it is obvious that due to the internet the “game” has changed, however, because of the internet it is a lot easier to interact with your fans, with other artists, and with major promoters and producers. It also helps when posting new media in order to get feedback.

Over the past two years, many celebrities have gotten famous using the internet, do you feel 2012 is your year? I feel like every year is my year (laughs). No seriously, yes I do. I have all of my ducks lined in a row. I am working with a winning team and the music is literally a piece of me. When you hear any of my music, you should know it’s the real deal, it really happened. The good, the bad, the ugly and the hideous.

What is a favorite activity of yours during your down time? I know this sounds cliche, but spending time with my friends and family. Without them, I probably wouldn’t be the person that I am today, a strong independent woman.