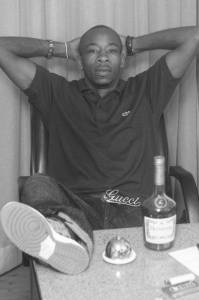 Bang ‘Em Smurf & Domination decided to take their careers into their own hands, establishing Feed Da Wolves Entertainment and signing many artists from Queens and their native Trinidad. In 2009, a major win for the duo took place when Rick Ross called upon them. Rick Ross was not considered among the biggest rap stars in the game, but after three years of releasing albums, he made a name for himself as a consistent hitmaker. While working on his third album, Rick Ross recorded “Mafia Music,” a blatant diss aimed at 50 Cent, who had been insulting those closest to Rick Ross for nearly two years. With the feud getting hot, Rick Ross refused to back down, only adding more weapons to his arsenal, teaming up with Bang ‘Em Smurf & Domination. Initially a power play, from both sides, soon turned into a brilliant business move, which is still paying off for Feed Da Wolves Entertainment.

One of the first artists Bang ‘Em Smurf & Domination began working with was Young Dice, now known as Maybach Dice. When Rick Ross invited Bang ‘Em Smurf & Domination into his fold, Dice was also brought along and was soon added to Maybach Music, Rick Ross’ then-newly formed record label, in a joint venture. By 2011, this deal began to truly take form, when Rick Ross added Wale and Meek Mill, which was followed by a distribution deal with Warner Bros. Records. In December 2011, Rick Ross made it clear to everyone Bang ‘Em Smurf and Feed Da Wolves were a part of his network of affiliates. Unfortunately, Domination is currently incarcerated, but when he is released, he will be a part of the ever-growing legacy of Maybach Music. Rick Ross has frequently stated what fans saw last year is only a teaser of what his team will do in the future.

While Bang ‘Em Smurf is not a signed artist to Maybach Music, he is a member of the overall team, meaning he has full support from Rick Ross. Currently, Bang ‘Em Smurf preparing for the release of his long-awaited project, Blacklisted: Kill on Site. Despite his years in the game, Blacklisted will be the first full project from Bang ‘Em Smurf, as he did not begin truly taking rap music, for himself, seriously until 2008. But, since he focused on his own career, and the development of those around him, Bang ‘Em Smurf has experienced a strong amount of success. Regardless of how it happened, Bang ‘Em Smurf holds the distinction of being the only artist to have worked with both G-Unit and Maybach Music, two crews which have both enjoyed extended stays on top of the game. Things did not happen for Bang ‘Em Smurf when he expected, but better late than never, he is now working with the hottest crew in the rap game.

Tyler, the Creator: The King of Controversy
Is Nicki Minaj going to stop rapping?