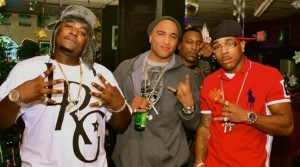 “Turn up!,” “fuck you mean?,” those are two phrases Cognac Gunna has clubs throughout the South shouting. Cognac Gunna has built an incredible buzz, releasing several mixtapes and street singles over the past few years. In 2011, Cognac Gunna became one of the biggest underground artists in the game, with his Oil Spill Ent. logo posted everywhere.

Two years ago, Southern Louisiana was hit with a horrible unnatural disaster, as prominent oil company, BP, accidentially leaked oil into the Gulf of Mexico, ruining the summer for beachgoers. While it has been two years since BP’s oil spill, there are many who still want justice, even after they have hired a cleanup team to clean the beaches. Cognac Gunna also began his Oil Spill during this time, but his has been greatly appreciated, as he has kept crunk hip hop alive through his movement. Stages all over the South have been rocked by the movement Cognac Gunna has in place.

The strong buzz Cognac Gunna built in 2011 peaked with him being signed by Big Cat Records, but it was his own Oil Spill that has helped make him recognizable with the fans. Cognac Gunna has a roster full of talent, diversifying the Oil Spill label, as he has poets, rappers, models, and other forms of entertainers signed to the company. Both in the South and the Midwest, Oil Spill Ent. has a strong following and it is still expanding. It has become a commonplace for rappers to also head their own companies, it is a necessity for those who want long-term success, regardless of how their careers pan out.

Cognac Gunna has rocked stages in Alabama, North Carolina, Illinois, South Carolina, and in many other states. Soon, Cognac Gunna will be taking his act to Atlanta. Regardless, he will be bringing the wave of his Oil Spill wherever he goes.