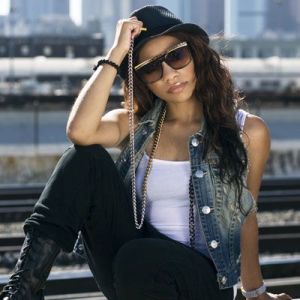 Today marks the seventeenth anniversary of Eazy-E’s death. While the iconic rapper died nearly two decades ago, his legacy lives on. No evidence is any clearer than the children he left behind. His son has been making music for over five years, going by the moniker, Lil’ Eazy-E. Eazy-E’s daughter is also trying to make a name for herself in the music industry, going by the name of E.B. Wright.

XXL caught up with E.B. Wright, asking her about her father. E.B. Wright spoke directly with Christian Mordi about Eazy-E. Wright provided an in-depth discussion about her relationship with her father and his legacy. As stated, Eazy-E’s legacy lives on in various ways.

â€œEach year I seem to find something new or different to do [to celebrate his life and death]. This year actually I want to be pay homage to my father because a lot of people know who I am, and a lot of people know that I am Eazy-Eâ€™s daughter. A lot of people my age, they know who he is and he is a big figure and a legend and somebody famous but they donâ€™t really know who he is. So every year and even through my music, as well, Iâ€™m really trying to â€”while [still] being myselfâ€” Iâ€™m really trying to bring along and explain, you know, his legacy and let people know my age and younger exactly who he was and what he did, you know, for the music industry and the world.

I miss everything [about my father]. The things I remember the most, honestly, I had a couple of years with my dad but we did spend a lot of time together, and till this day I still have dreams about just different special moments. The one that stands out the most is one of my birthday parties. And itâ€™s crazy that it has been 17 years and 17 birthdays that he has missed. I just miss everything. In this day and age you get to see all these different celebrities with their kids from Will and Jada with their kids and you see even Jay-Z and Beyonce have a kid now, and you see Puffy with all his kids and Run with his kids and Russell Simmons with his kids and itâ€™s really, really hard to be one of those kids and not have my father here. He was such a big name and heâ€™s not physically here to support me and to be there and for people to see me with him. A lot of that is just really heavy on my chest. It really is and I just miss everything about him.

I think his fans should really remember him for how he revolutionized freedom of speech. With me, now being a big fan of Kanye West, looking back on that kind of level, you could say that my father was that back then, speaking his mind, telling the truth on how he feels. Like, in this day in age, itâ€™s Kanye West when it comes to thatâ€” no censorship, just really speaking your mind, just freedom of speech and thereâ€™s nothing wrong with that.

Everyone should be themselves and say how they feel, or do what they wanna do. Different is better and at the end of the day people wanna know the truth. You know, the fakenessâ€”thereâ€™s a lot of that going on. I want people to know that and know thatâ€™s the same way that I will be. So just speaking the truth and telling how I feel about whatâ€™s going on.

I do pop rock music and I would say my dad influenced not exactly the type of music that I have done but just [encouraged me] to be myself. I grew up in the music business, and I have a music background on my motherâ€™s side as well. But seeing who my father and mother were in the music business, just growing up around it, I think it was just something inside of me and something I loved and I think with my father not being here, it encouraged me to follow my dreams even more. I really just love music and my dad wasnâ€™t just music he was a businessman and entrepreneur, so thereâ€™s so many things that I wanna do and thatâ€™s how he inspires me: just letting me know that anything is possible.

Right now I am working on my album and getting ready to release a few different videos. The first one is for my single â€œWhat I Wanna Doâ€ and I am going to release a couple more singles, as well, before the album is released. Iâ€™m doing that independently right now, with my own money and Iâ€™m getting ready to release a web series as well. Iâ€™ve been offered a few things in regards to reality tv so I am just seeing what is going to happen with that, and I am just talking to a couple different people about my music situation right now so I have a lot coming and Iâ€™m excited about everything.

[My father didn’t only influence me, but others. Absolutely. Everybody from Little Wayne to Drake, 50 Cent, Kanye West. Hip-Hop today wouldnâ€™t be what it is today if it wasnâ€™t for my father. Period.

[I listen to my dad’s music for motivation]. I know its so random but â€œLittle Compton City Gsâ€ is like my absolute favorite song, not just because itâ€™s my fatherâ€™s but like totally in like all music. Like I really love that song. And â€œWe Want Eazy.â€ My campaign right now is â€œWe Want E.B.â€ Even my Twitter right now is â€œWe Want E.B.â€ and my website is wewanteb.com. Everything I am doing is â€œWe Want E.B.â€ So that definitely was inspiration from my fatherâ€™s â€œWe Want Eazy.â€ I watch videos from him all the time and, you know, he is not here so I have to use the little bit that I do have, so, thank God for technology and music and this is exactly why I love music so much, because if someone is no longer here it still lives on. All you have to do it pop up a CD or pop up You Tube or something and heâ€™s like right there.

[If my dad were alive today,] oh my Godâ€¦ he would be Jay-Z, the Russell Simmons, Puffy, 50 Cent. Like, my father definitely would have been a mogul. He was doing this stuff back then, Iâ€™m talking about the endorsements and investments and everything outside of music like film and like what Ice Cube is doing now and what Dre is getting into with the Beats, and different thingsâ€” my dad was doing these things 20 years ago. So you can only imagine somebody being ahead [of their time] back then 20 years ago. He definitely wouldâ€™ve been a billionaire right now, and the biggest businessman. And everything would be different from the people doing it now to even down to my lifeâ€” everything would be different. It trips me out. Itâ€™s really crazy how he isnâ€™t here. I really wish he was.â€

Very in-depth discussion and E.B. Wright was likely correct about her father being a billionaire by 2012 if he survived.