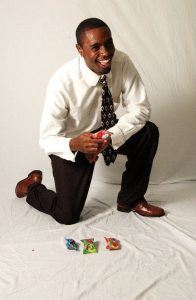 Following the success of TheSexSymbol87, Nelson Davis is currently working on his second feature film. While putting the finishing touches on his first film, Davis began writing his second film, which will soon be on the way. Back to work, the latest film from Nelson Davis will be called Take6, a film about show business.

Davis, himself, was impacted by the early days of “106 & Park,” and elements of this influence will be shown in this upcoming film. Again, Nelson Davis will be working with independent actors and, himself, will have a starring role in the upcoming movie. With Davis playing the role of Jarrell, the male lead, his personal and professional life will be a center stage.

The film will follow the ups-and-downs of the popular television personality.

Read the entire description below:

Take6 is a comedy/drama following the chronicles of 6 high profile individuals that are in â€œThe Lime Lightâ€ that reside in the fictitious city of Watercrest Beach, North Carolina, portrayed as the â€œHollywoodâ€ of North Carolina. These six individuals are Quinton Scott co-host of â€œThe E-Loungeâ€ entertainment television show (Nelson Davis), Lyric Long, co-host of â€œThe E-Loungeâ€ entertainment Televisi…on Show (Makia Hayes), Jarell Moore, Championship Boxer (Sammie Caison Jr.), Trevor James, Male Model (Lee Pate), Star Chance, Make-Up Artist/Stylist (Alicia Bates), and Christina Love, Realtor (Natasha Sutton). These 6 individuals are all â€œliving the lifeâ€ until Q and Lyric have an unforeseen one night stand, and Jarell does something, his best friend Q and his cohost Lyric are forced to report on their show â€œThe E-Loungeâ€ which results in putting a toll on both Jarellâ€™s career and his friendship with Q. Take6 takes the laughs and drama corresponding between these 6 individuals and some unexpected twist.