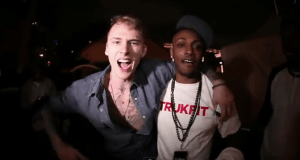 Last summer, Machine Gun Kelly signed to the record label who invented the remix. It has been less than a year since Machine Gun Kelly joined Bad Boy Records. Already, the rapper representing Cleveland is making noise. In recent months, his “Wild Boy” single has gained significant radio play, leading up to a remix being recorded.

Discussing the remix, Machine Gun Kelly said he wanted something different, “wild boy, dope boy shit,” and then he could come in and do his own thing. Mystikal also spoke on the collaboration with XXL, saying “Our camp figured it would be a nice opportunity to jump on something like thatâ€”you know, get them youngsters, â€™cause they gonâ€™ introduce me to the younger audience,â€ he said. â€œOnce we did that, we shot the remix for the video yesterday. We brought it all together. Itâ€™s that rapid fire, machine gun. He got the right name. Itâ€™s good to see young, fresh artists in the game. We need that.”