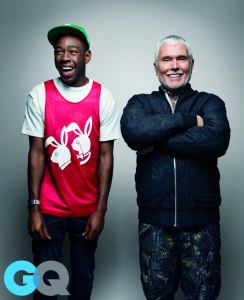 Proof of hip hop’s evolution is in any Tyler, the Creator song or video, and even in his name. At a time when rappers were being criticized for being unoriginal, Tyler, the Creator is unlike any other rapper, ever. A California “skater dude” with an eccentric state of mind has risen to become one of the most-popular rappers in the game.

Read excerpts of Tyler, the Creator’s GQ interview below:

Tyler, The Creator on being influenced by Supremeâ€™s approach to design:
â€œVisual aesthetic is important to me. I take video directing and designing album art and shit like that very serious, and they do, too. So that’s one thing I like from them, the way they design certain thingsâ€”not too much, not too little.â€

Tyler on Supremeâ€™s artist collaborations:
â€œThere’s a lot of artists I didn’t know about that I learned about from them. My favorite collaboration they did was with Sean Cliver. He has decks with black dudes in KKK suits, a white kid with a Hitler mustache dressed as a pimp, stuff with John Wayne Gacyâ€”just cool decks.â€

Tyler on fashion:
â€œI’m not into fashion, but I like design. I wear the same shoes every day. These same pants. I’ve been wearing this Supreme hat for a month.â€

Glenn Oâ€™Brien on Tyler, The Creatorâ€™s, music:
â€œTo me, it’s almost like stand-up comedy with a beat.â€